Anime Reporter checks out the very first episode of the brand new animated series Guardians of the Galaxy, based on, you guessed it the Marvel film of the same name which is in turn based slightly more loosely on the Marvel comic book of the same name.

We all remember GotG, right? I loved that movie, as you may recall from my words located here on that very subject. The cartoon starts off with Blue Swede’s Hooked on a Feeling playing on Peter Quill’s walkman as he and the other guardians scale a rocky tower. That’s right, Awesome Mix Vol. 1 is still in play and, while the tune is different, it’s already starting to feel like a less charming version of the film’s opening scene.

Minutes into the cartoon, as the team are breaking into a facility to liberate/kidnap and arms dealer/freedom fighter/none of the above, Peter is asked the somewhat on the nose question of whether the guardians are meant to be heroes or outlaws. This question feels all the more awkward for being asked by Gamora, one of Peter’s fellow guardians and his response of “Why can’t we be both?” honestly makes me wonder if those characters were paying attention when Peter delivered that exact sentiment a lot more smoothly at the end of the film.

Unfortunately. Things do not advance much further than 23 minutes of “Hey, this or something very like it was in the film! Cool, right?” Groot, the kind yet incredibly dangerous tree giant takes a lot of damage in one fight and much later falls apart revealing a tiny version of himself hidden inside, paying very little attention to how Groot actually ended up as a tiny stick in a pot during the film in a mad dash to replicate its cute factor.

The overall plot of this first episode feels like a fairly half-assed attempt at copying the film’s actual plot except with the team already assembled. There’s a mysterious artefact that all the powerful baddies, (including Thanos, naturally), seems to want to get their hands on, so the guardians jump into the fray to save the day. We’ve got Drax’s need for vengeance and Gamora’s rivalry/hatred for an adopted sibling. Groot is vaguely adorable and Rocket wants to blow stuff up and make some money. Peter, or Starlord, well… he kind of just wants to say things that probably sounded smooth in his head. There isn’t really any motivation for why this team of ne’erdoewells are so determined to lock horns with Thanos once more and this episode feels more like a crude advertisement to remind people about the film.

He was in it, remember? The guy from Blood Diamond and Gladiator? Yes, I could google him, but I’m not putting in more effort than the people who made the cartoon and that actor almost certainly didn’t sign back up for this.

The animation is… unfortunate. There are a few scenes with wonderfully detailed backdrops and animation, but these give way to more than a couple scenes of animation so crude that I had to ask myself who made this show… Then I remembered that it was Marvel and Disney which made me feel a bit cheated.

Disney… Marvel… This is not your best level of work. Must try harder.

Unfortunately, the characters don’t fare much better than the animation. Dialogue feels very forced and, while I’m sure the cast did their best to pull off their impressions of the original ensemble, it really lacks any of the charisma or light-heartedness of the original. The action reels in many previously seen characters and locations, making very little effort to produce anything new. The only really new element is a more specific reference to Starlord’s alien heritage. 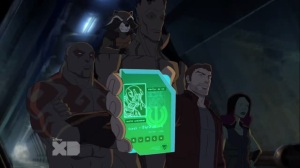 Ultimately, this episode feels like a missed opportunity to give us something interesting and light, to make us care about it as a series rather than attempt to borrow from its older brother’s acclaim. This show has a lot of room to grow into, but I highly recommend it gets its rocket boots on pronto, because halfway through this first episode, it was already starting to feel a little stale, and there’s no reason that this premise, these characters, or the creative studios behind them should disappoint. Let’s hope they don’t.