Anime Reporter switches gears now to the world of video games once more to talk about my experiences with the demo version of The Legend of Zelda: Triforce Heroes for the Nintendo 3DS. The full version of the game comes out this Friday, October 23rd 2015, but the demo version was released last week to give players, (including me), a free taste of the experience.

Unlike the typical Zelda experience, Triforce Heroes puts the emphasis squarely on teamwork and co-ordination, enabling players to play in teams of three either by connecting with others online or wirelessly, (naturally, as it’s 2015), with friends nearby on their 3DS systems as well. There is an option for a one-player mode using two “dolls” as substitute players in the full game, but the demo restricts it to three friends sitting together and playing or throwing a team together with whoever happens to be online at the time. The demo version is offering online play only at select times, so the majority of play is set to take place between you and your two favourite pals of geographical convenience. As it happens, my girlfriend and I, being in Ireland in October, didn’t fancy heading out into the elements to find a worthy teammate and so we pressed on as a duo and on to heroic, dungeon themed adventures.

We didn’t get past the castle lobby.

Unfortunately, playing as a pair is not an option for the game, so we were essentially stuck in a co-op limbo, waiting for a third party that could never come. But we did have a tremendous time being obnoxious with the gestures and facial expressions that make up the game’s communication features. Included in the lobby are options for waving, saying ‘hello’, looking sad and offering an enthusiastic thumbs up. The full-dungeon experience offers a few more options including “Come here” and one showing the game’s “totem” ability which involves picking up one or two of your comrades on your shoulders and essentially walking around with them so they can reach higher vantage points or even throw them over gaps. What we discovered while playing is that once you’ve picked someone up, you’re essentially in control. They can’t jump off your shoulders until you throw them or run headfirst into a wall. Which brings us to my girlfriend’s wonderful discover. While we wandered about the lobby relatively aimlessly, she stampeded into a wall and a purple ball dropped from the ceiling. This ‘Lucky Ball’ actually provided a lot of entertainment. Hitting it with your sword makes it fly into the air, where you’ve basically entered into a game of Keepy-Uppy, chasing and hitting the ball before it can hit the ground to the rhythm of a Zelda-esque piece of music. This actually pretty quickly devolved into a giggle-fest as we tried to distract each other with rapid firing emoticons and pick each other up mid-volley. We genuinely had a blast just messing around, enjoying being different-tinted Links in the same game.

What I also very quickly gathered from our time as teammates was that this game is probably going to be a troll’s dream, as online play will need all three players on a team to co-operate and communicate in order to help each other across a level and that each level cannot be completed without all three players at the proverbial finish line. In a game where you can pick up a player and throw them down a pit with absolutely no way of stopping you, anyone who’s more interested in spoiling other people’s fun than in vanquishing virtual villains is going to find themselves in a very entertaining position. 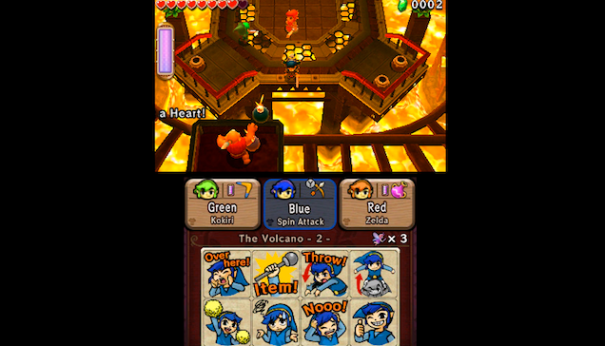 That said, last Saturday, when the online gameplay opened for demo users, I had a blast. The two other users, total strangers to me, were very capable players and we worked together pretty efficiently to solve three dungeons’ levels. I made a few stupid mistakes and cost us our communal life points a couple of times, though I wasn’t the only one to lose some health that could have perhaps easily been saved and we generally worked together very well. I imagine that a lot of gameplay will involve groups of three Zelda fans sticking together level after level while groups of trolls circle around teams with newcomers until they’re booted out. While trolls are definitely a possibility, they needn’t be a certainty by any means. I should also point out that it took me a while to find the team I eventually played with. At least five times I joined a new trio, only for the connection to stall as one of the players decided to disconnect or, their Wi-Fi connection failed us. That said, when the full game is up and running, I think it’s going to be a hell of a lot of fun, offering a whole new brand of gameplay to the series and, if, perhaps as my online cynicism has convinced me, there are a few too many troublemakers who want to annoy for annoyance’s sake, then there’s always the single player mode or wireless gameplay with friends.

Each level offers players the chance to choose a particularly outfit, each of which offers special abilities and at the beginning of a level, each player chooses one of three items to share between them, from bows to boomerangs and gust jars which can blow characters and items across larger distances than throwing them. The full game is looking to be a worthy addition to my favourite family of video games. Only a few more days to wait, too!