Anime Reporter returns to the superhero-satire that is One Punch Man for manga Volume 03 (chapters 16-20). This series is very much worth picking up, offering both originality and humour so I’d definitely recommend checking out Volume 01 if you haven’t already.

If you’ve already read the first two volumes and want to know more, please, read on.

Volume 03 continues more or less exactly from where it left off, with Saitama eager to become a registered hero so he can finally start getting some recognition for his heroism and he and Genos are about to take the official superhero registration exam. Now, it’s no secret that Saitama is just about as powerful as they come so you can expect that he’ll have what it takes to make it as a hero, while Genos, his devoted disciple is a powerful, dedicated, experienced hero so there’s really not much standing in either of their ways. 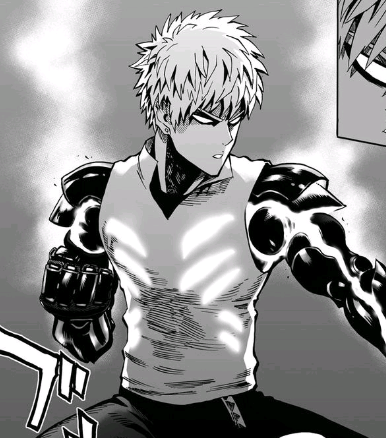 Except… there’s a written element to the test, and Saitama, while very physically capable, is neither particularly wise nor tactical, so it would be wise to expect a slight difference in the pair’s results. Actually, expect a pretty massive difference. Genos manages to enter the world of heroism at the highest rank, while Saitama’s scraping the bottom of the barrel.

This means that they’ve got massively different tasks to complete as heroes and, while Saitama may be unsurpassed at toppling gargantuan monsters, he’s not so well-versed when it comes to smaller fare like rescuing kittens or stopping pickpockets. This may not seem like too big a deal until you learn that, should Saitama fail to stop a petty crime or perform a rescue at least once a week, he’ll be formally expelled as a hero. The pressure’s on him in a way he hasn’t ever really experienced before, but he generally manages to find a way.

There’s also a look at the expanded world of superheroism in this world, spread across the variously alphabetised cities and just some of the standout heroes that occupy them. We’re given a brief example of Saitama’s attempts to teach his disciple a thing or two and the whole storyline moves along slowly, but oh so enjoyably.

One Punch Man Volume 03 is currently available in English and I can’t recommend it strongly enough. This series is a gem in a world saturated with superheroes.