Anime Reporter hits the presses with a new installment of a classic series. The latest Ghost in the Shell anime film is already available on DVD and Blu-ray from the fine folks at Manga Entertainment UK, so I’m going to talk about it at moderate length.

For quite a lot of anime fans, Ghost in the Shell needs no introduction, but since anime fans come in all manner of variations, and since there are likely to be a lot of people looking for information on the cartoony thing that the new ScarJo film is based on, let’s set off on an introductory note:

Ghost in the Shell is set just a couple of decades into the future when technology has taken over people’s lives even more than it currently has and it’s become pretty commonplace for people to upgrade themselves with cybernetic arms, legs, eyes, or, in some cases, to become completely augmented with technology, effectively transferring their consciousness into a machine. The series follows an elite police force tasked with taking down cyber threats in a world where a person can be both a hacker and a computer and someone’s body is just another piece of hardware to be replaced.

Ghost in the Shell places a strong emphasis on action and politics and there really isn’t much of an element of humour to be found. Characters are much who they’ve been in earlier films and there isn’t a huge amount of character development throughout the flick. Rather, it stays true to form, delivering the tones and style that longtime fans have comes to expect, while delivering enough exposition to keep newcomers happy.

The film starts off with protagonist Motoko Kusanagi and her team being given a new security level, just in time to deal with a hostage crisis. Making matter worse, the Prime Minister is assassinated using a briefcase bomb and there are no clear leads as to how it was done. 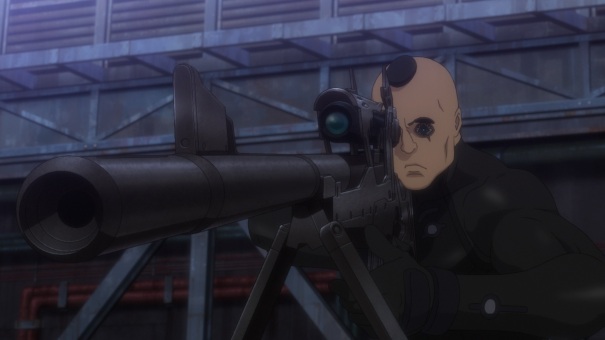 Visually, the film is astounding, as the series always is. Beautiful light effects are merged with smooth animation to deliver something that looks and feels futuristic, while staying true to its traditional character-designs.

All in all, Ghost in the Shell isn’t a barrel of laughs. Action is intense, but realistic within its sci-fi setting. Expect more political motivations than personal ones and more tactical meetings than emotional break-throughs. Ghost in the Shell knows who its fans are and it caters to them, delivering an intense, well-paced piece of futuristic police-work.